Need help from a fellow owner, something to air - discuss away!

When I converted the Rickman (yes, I know) from carb to injection it felt quicker, but I came to the conclusion that with a carb, the fuel is drawn in by the engine, so when you stamp on the throttle it's just a little "behind the curve", but with injection more fuel is squirted in so it kind of anticipates the rev rise & the engine feels more lively.

Great work Chris, youre getting there slowly but surely

Fury1630 wrote:When I converted the Rickman (yes, I know) from carb to injection it felt quicker, but I came to the conclusion that with a carb, the fuel is drawn in by the engine, so when you stamp on the throttle it's just a little "behind the curve", but with injection more fuel is squirted in so it kind of anticipates the rev rise & the engine feels more lively.

Injection responds more accurately to the engines demands if set up properly. With the revs rising the engine needs extra fuel to accelerate. Once there, the engine runs on a constant fuel amount unless demands change. Injection systems have an acceleration map on top of a fuel map which is much more accurate and responsive than old carbs coughing and spluttering when giving it a boot full.
Power.. small nail, fast hammer, Torque.. small nail, big hammer.. I got a big hammer

Good job Chris. Sounds like that side of things is working great.

I really enjoyed learning about the tuning side of things and using Tunerstudio.

Post a screenshot of your AFR target table and Ignition table if you fancy. Be interesting to see them.
Westfield Zetec turbo & Westfield Megabusa turbo
Top

TBH I've just let Tuner studio do its thing, so whilst I appreciate there are gains to be had I've not changed any table manually. Looking at the tables you can see where I've not managed to tune, mainly as I've just not driven in those areas. I did try to be comprehensive so not just stamping on the loud pedal:

Yes I've been drinking, what of it!!
Top

Hi Chris... thanks for posting those and also sending me a log data file of the engine on a blat.

I don't know much, but luckily there is loadsa stuff on Google and locostbuilders.
Anyway, based on my very limited knowledge...

The Ignition Table looks alright but I'm never sure about this... without being able to hear or datalog engine 'knock', it's kinda guess work. I do know that chap from Bailey Performance says that a zetec requires 28 deg of timing from 4000 RPM to redline. Possibly more - up to 32 degrees - but you should use the minimum amount of timing required to make the the power.
So you could add a couple of degrees of advance from 4000 rpm to redline. 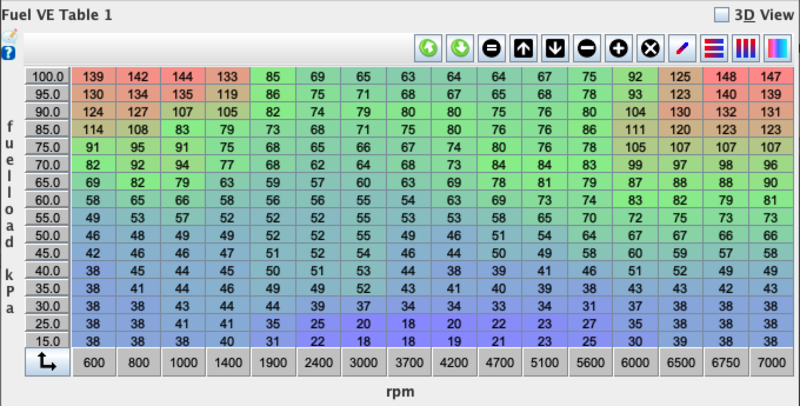 You may not drive in this high rpm & full throttle range often, but it is pretty important.
If you don't fancy thrashing the car too much to auto-tune the map up there, then I would manually tweak that range to reduce the fueling.
And here's why...

The Mega LogViewer screenshot below (from your data log) shows why this is important...

(for ppl not familiar with this program - a quick guide

- the top graph shows:
-- Engine RPM (WHITE LINE climbing in a linear way, up to 6203 rpm at the point where were are currently looking at the engine data).
-- MAP sensor pressure RED LINE (in Kpa; 100 kPa is maximum in a natural aspirated engine). In this case the engine is at 98 kPa
-- Throttle Position GREEN LINE (in %; so engine is at 100.2% full-throttle at this point in time).

- The middle graph just shows the measured Air/Fuel ratio. At the moment in time we are looking at this, you can see that the AFR is 9.6 which is very rich.
You can also see that the trend for the AFR line is sharply down, so getting richer. If the engine were allowed to rev to say 6750 rpm then I would imagine the AFR would drop in to the the 8's.

So what should the AFR be at this point? Well, that is where the two tables on the right side come in.
The bottom table shows the AFR Target table, and the purple circle that I drew on the screenshot shows the area where the Air/Fuel ratio should be. (Well, actually look at the smaller blue circle with a blue dot inside for the precise area of the table.)
So, at this engine load and rpm we really want to be seeing an AFR of 12.5 to 12.6 ... not 9.6!

What can be done about this? This is the where the top table, the VE Table (Volumetric Efficiency) comes in. Essentially it represents how much fuel is injected in to the engine... high numbers = more fuel.
So in this case, at the precise moment in time we are looking at, the VE table is showing an area of really quite 'high' numbers... out of character with the rest of the table values below and to the left of this area.
That is because this area of the table just has not been driven enough to provide the ECU with reliable data to change and update the existing table values. But we can make some assumptions... based on the very rich AFR reading (9.6) that this area of the table is 'wrong' and should be leaned off I.e. reduce those numbers.
The ECU algorithm will interpolate two (or four) areas of the table in cases where the engine 'position' is between two (or four) cells.
So in this example you can see that it is using data from the cells '92' and '93' (which are likely reasonably correct) but then also uses data from the cells '125' and '123' (which are certainly not correct).
I'd lower those higher cells... maybe 100 would be a good place to start... and may need to go even lower. It'll make the auto-tune easier as it won't be trying to 'fight' the existing high values.

Thanks Steve for the very compressive guidance. I guess I know the theory but I'd want to avoid leaning the engine to the point of destruction. Good advice on using AFR vs AFR target. I'd made the modifications below, which I'll test on Wednesday and tweak again and try thursday morning. I'll be taking a laptop so can continue to tweak. I'm planning on saving a copy of the tune before we start climbing then I'll tweak again once we're up high. Be interesting to see the differences.

Yes I've been drinking, what of it!!
Top

Hi Chris, yep - too lean is worse than too rich, but I think you'll be OK with those numbers. Can run some tuning or datalogs and see what's what.

ChrisL wrote:I'm planning on saving a copy of the tune before we start climbing then I'll tweak again once we're up high. Be interesting to see the differences.

Your megasquirt has barometric correct turned on. So what this does is takes an initial ambient MAP reading when you turn the ignition on, and uses this reading to alter the fueling based on that initial MAP reading.

So I think that as long as this is turned on, you might not see much difference in the tuning as it'll be trying to compensate. But worth bearing in mind that it only takes the initial MAP reading when ignition is turned on, so could climb/descend over 1000m during a blat in the Alps.

I just Googled what 2500m altitude is in kPa. It's 76kPa which is quite a difference from the ~100kPa at sea level!
Westfield Zetec turbo & Westfield Megabusa turbo
Top

Ahh yes I'd forgotten about that, I'll have to turn the engine off for every 100ft of elevation. I'll let you know how I get on with the tune tomorrow...
Yes I've been drinking, what of it!!
Top

greath thread this is getting very interesting.. and awesome chris on having a go.

Latest scores,
Ran auto tune this morning with the new tables loaded, plenty of reving to 7000 or as near as. I still think the top end needs a little more levelling

Yes I've been drinking, what of it!!
Top
Post Reply
301 posts

Users browsing this forum: No registered users and 5 guests